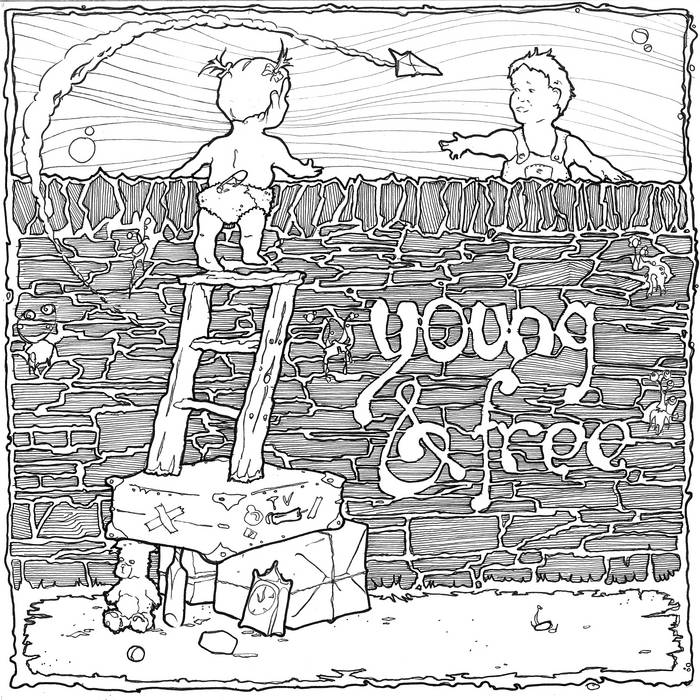 If previous release 'Songs of the Bride' was a meditation on marriage, then these five songs take the exploration of those themes of love and longing in a fresh direction. Still drawing inspiration from the twists and turns of her relationship with teenage-sweetheart and now-husband Peter, Taryn here casts a nostalgic eye back to the years before marriage, and the resulting collection of songs is an unabashedly enjoyable tribute to young love.

Opening track 'I Am Here' claims that "there have been days when my tale seemed a lazy man's poem without rhythm or rhyme", but the songs presented here are far from committing the crime of poetic laxity. Rather, the carefully crafted lyrics reward repeated listening and reveal an endearingly whimsical set of images. Take for example the confession in 'All Your Time For Me' that singing "love songs in the rain//... fills the ocean in my soul//with the downpour in my brain".

But neither can Taryn be accused of being more a writer of poems than a real musician. She clearly has a gift for writing a memorable tune but also manages to avoid the pitfall of same-ishness that the songs of so many aspiring artists fall into. From the opening track's doo-wop backing chorus to the melancholic violins which close the EP, there is a wide and wonderful variety of influences here on display.

The 'Young and Free' EP is being released in celebration of the first anniversary of Taryn's marriage. It will be available for free download from her official website www.tarynleiaprescott.com, together with all of her other recordings. Why such generosity? Because, as Taryn muses on her blog, "the best things in life are free" -- or better, she suggests, "the best things in life are gifts".

Track Name: I Am Here
Someone once told me my life's like a film
full of drama, intrigue and romance
but I don't feel like a real heroine,
just a girl with some time on her hands
there have been days when my tale seemed a lazy man's poem without rhythm or rhyme
there have been weeks when I've lied through my teeth
when they asked, i said i was fine

But now I'm here
Here with you, after all we've been through
And I hope I will never forget what it took to get here

Now i'm here
Here with you, after all we've been through
And I hope I will never forget what it took to get here

Let me
stop to
savour this
moment
of contented bliss

Now I'm here
Left behind my regrets and my fears
and there's nowhere else i'd rather be if i could do it again
turn back time, change my now and my then
i find grace in those wilderness years
because they brought me here
Here and now and I can't explain how good it is,
I don't have to look back even once, finally here with you,
after all we've been through,
And I stand on the brink, almost too glad to think
I am here, I am here
Track Name: Thought Train
She thinks she’s going crazy
This thought train is wild
She wishes she knew better
She feels like a child
Searching for the answers
In the smouldering sky
She wishes she knew how
And that she dared ask why
Have you seen her when she’s smiling
Cried with her when she cries
Have you asked her where she’s going
And waited for her reply?

This whole situation
Is getting a little tense
Advice is getting stronger
The atmosphere is dense
with the shouts of vendors hawking
love and immortality
she shouts but no one listens
‘this is a wild-goose chase!
You can’t buy satisfaction
can’t keep your pretty face.'
and still her own misgivings
are her worst enemy

Whoa...
Track Name: Waiting Is What I Do
Waiting is what I do, I spend my days waiting for you
as the twine of time unwinds, you are always on my mind
seven times my heart is true, my love

You like to spin me round, sweep my feet right off the ground
but there's space between us now, filled with hills and seas and cloud
one day i'll make it to your town, my love

and the sunset shines across the sea
would you run down that shining path to me
and the waves are diamonds on the sand,
when i'm with you, everything is grand

ohhh
you take it in your stride
i follow close behind
you take me by the hand
dancing footprints in the sand
Track Name: All Your Time For Me
Sometimes
It strikes me as strange
that my life just goes in circles, oh, yeah
cuz here I am doodling hearts on paper again

i want all your time for me... ooh
Track Name: Meant To Be
the stars
are out
the night is whispering
the day
is done
a chapter of this dear thing

you and me
how it's meant to be

standing on the edge, the world at our feet
the splendour knocks us to our knees
the words come tumbling out now
you and me
how it's meant to be
we are young and free
won't you marry me